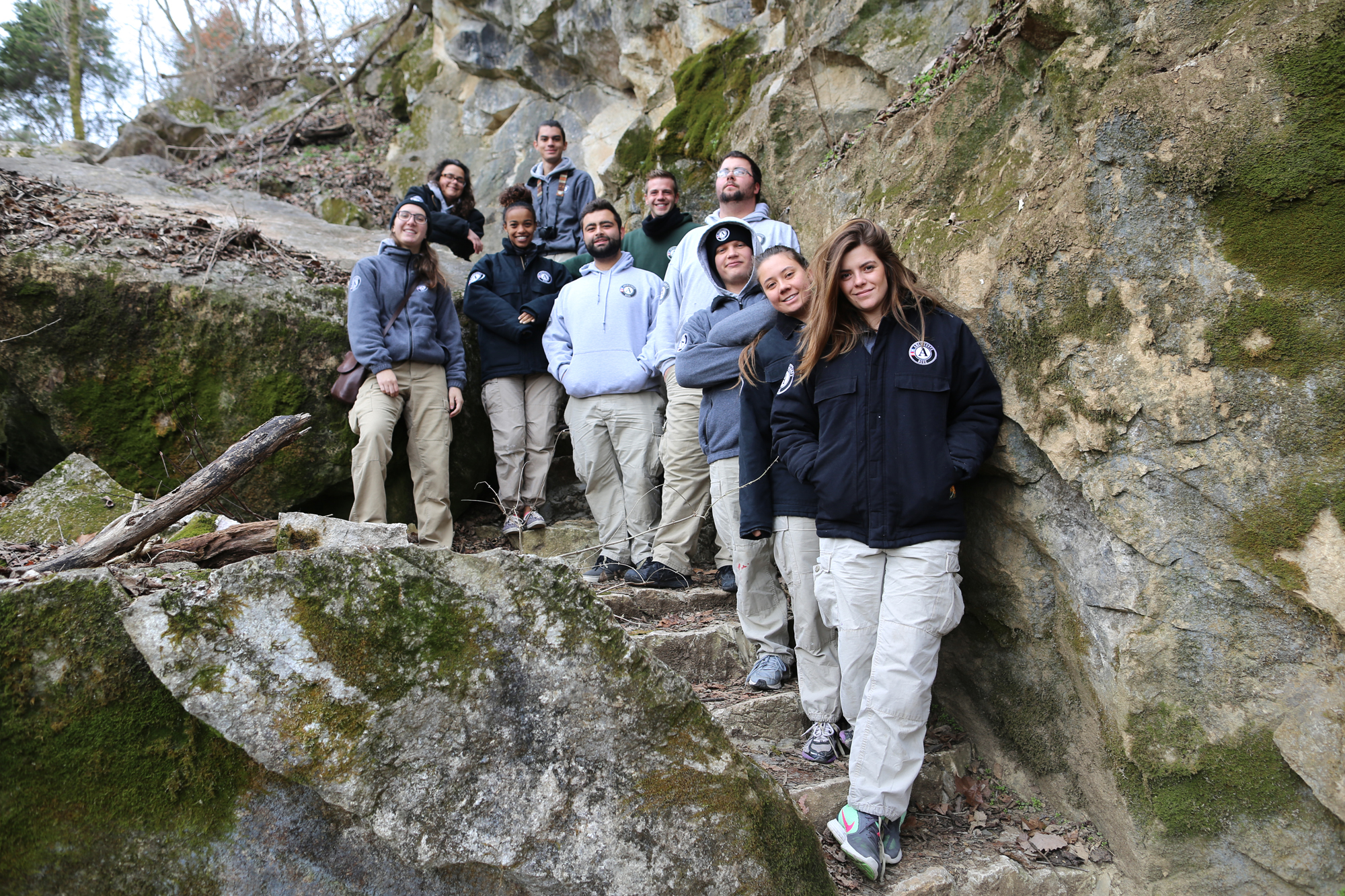 On a warm February day I had the pleasure of sitting down with the members of AmeriCorps*NCCC team, River 7, to discuss their service year thus far and to get a sense of how they are enjoying Knoxville and their service at Ijams Nature Center.

I spoke with Kaitlyn Wesolowski while taking a break from cleaning off a wooden gate structure at Mead’s Quarry.  We took a seat by a pile of large stones the team had moved in previous days for the purpose of extending a stone wall.  Kaitlyn told me she was enjoying the beauty of East Tennessee and the artsy feel of Downtown Knoxville.  She mentioned that when she joined NCCC she didn’t initially think she’d be close to her team but found over the course of the year that she had learned to value everyone in her group and that working with people with difference views creates growth within herself and others.

It was approaching lunch time and many of the crew loaded into their gray 15-passenger van for a fast food run and I had the opportunity to sit in one of Ijams’ softly lit meeting rooms with Antonia Vasquez and Eleni Vincent to talk about their unique experience in NCCC.  This prompted a discussion of how aware the Knoxville community seemed regarding AmeriCorps and how people recognize “the A” and have had strangers thank them for their service.  When I heard this I was proud knowing that our little big city in East Tennessee had been so welcoming and so aware of the good works AmeriCorps members have contributed to our community over the past 22+ years.  Additionally, Antonia reflected on the hands-on skills she had developed through her service and, now approaching the end of the year, how capable and confident she was that she could overcome any challenge to get things done.  Eleni seconded this sentiment and revealed a clear sense of the service they were performing at Ijams noting that she would ask visitors about their thoughts on the work and that the team had a strong drive to get things done to leave the space safer and more accessible than they found it.

At this point, the rest of the crew returned and I had the opportunity to learn about how River 7’s disaster response work in Louisiana had, in many ways, defined their year.  I was excited to hear their testimony regarding this experience as several of our own members had deployed to the floods earlier in the year through the Red Cross to support bulk distribution and sheltering operations.  Renzo Quevedo reflected on a memory where his Red Cross ERV (emergency response vehicle) had been swarmed by a large group of people during a distribution run to a neighborhood and he and another Red Cross Volunteer had to calm people down to get them the resources they need in a safe and structured manner.  Lian McGuire talked about mucking out water damaged homes and the value of the personal interactions with homeowners who were receiving these services.  Then Trevor Herczok discussed a tense situation in the shelters where the team, and the shelter workers in general, had been met with skepticism with some shelter residents not believing that they were actually there to help.  Kyle McBath told a story about a supply run where a man came out of his home that was still flooded hitting the water with sticks to scare away snakes while a child played in a canoe in his front yard with his dog.  Gary Moore made a pointed summarizing statement about all of these experiences regarding the surreal nature of serving in a disaster stricken community.  “When I was there I couldn’t believe I was in that moment doing this work.. I didn’t know I could be a part of something so meaningful.”

After lunch the team returned to Mead’s Quarry to continue working on building the stone wall, removing invasive plants from a historic lime kiln structure and planting trees.  As I reflected on the testimony I had heard from River 7, I realized that though our service journey was separated by over a decade.  Several things continued to ring true for all of us.  AmeriCorps service taught us to get things done even when all the pieces weren’t readily available for the challenges at hand, AmeriCorps taught us to be adaptable and resilient to change and keep an even keel in chaos and, most importantly, service showed all of us how stepping outside of ourselves to be a part of something bigger can raise us up and heal our communities.