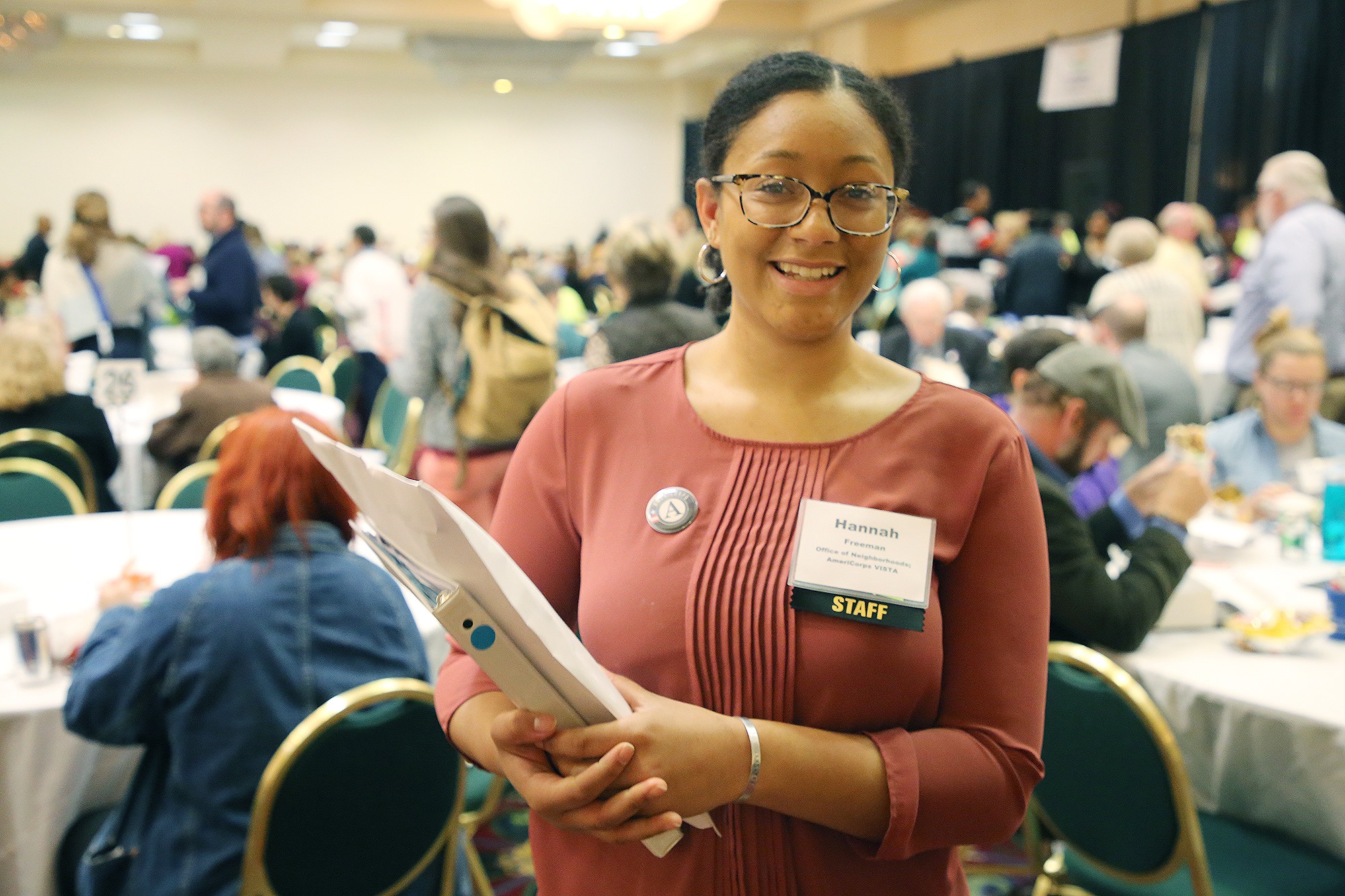 With a small staff but mighty power, the City of Knoxville’s Office of Neighborhoods is always looking for new and creative ways to engage community members to organically bring about the change they want to see. I had the opportunity to sit down with their current VISTA member, Hannah Freeman, to discuss how she has begun to make an impact through the Office of Neighborhoods in Knoxville.

We began by discussing the overarching goal of the office – to increase the capacity of neighborhood groups so that they can utilize the resources made available to them and better communicate their wants and needs to city government. The office works as sort of a liaison between community members who want change, and city officials who can help make that change happen. In true VISTA spirit, Hannah has been assigned to work specifically with lower income neighborhoods, supporting them by making resources available.

“When we talk about resources, a lot of people talk about money or skills, but they don’t talk about the people. I think that when you get people connected to each other, they start seeing each other as a resource. That builds resources for them that we are not able to provide as an office. It opens up this whole world of resources that is otherwise impossible to harness.”

“For me, my particular passion is geared towards food security. There is only one grocery store in East Knoxville. Personally, I think that’s a big issue they need to tackle. But when I talk to groups, maybe it’s blighted property, maybe it’s transportation, maybe it’s drugs or crime, or maybe it’s finding safe spaces for their kids to play because there is no playground. That’s something I’ve had to keep on top of as I go through figuring out what needs the community has that I can help with – what is the community’s priority. My priority is great to have, but I’m not a long term community member, I am transitory. If I am really interested in helping strengthen the community as it is, then I need to listen to what their priorities are,” says Hannah.

In addition to Hannah’s specific work with low income communities, the Office of Neighborhoods puts on an annual Neighborhood Conference. The conference is free and open to anyone. This year, 80 exhibitors from area non-profits and government offices were present, three community development workshops were held, and the conference boasted over 600 attendees on a rainy Saturday morning.

“The goal of the conference is to connect neighborhoods, leaders, and active residents to Knoxville’s resources and to empower active residents to continue doing the work that they are by providing them with knowledge and skills, as well as recognize the wonderful work done by community members in the past year. They do incredible things.”

The conference is largely run by volunteers, and Hannah was tasked with volunteer management. One of Hannah’s ideas was to change the volunteer base.

“…something that I changed from previous years was our reliance on active neighbors as volunteers. I wanted to get away from that and give the volunteer opportunity to college aged community members, so active neighbors could enjoy the Conference and to provide an opportunity for younger, transitory community members to see how much Knoxville cares about its communities. A lot of people my age think of civic engagement as protesting, sit-ins, etc. but neighborhood groups are also important centers for civic engagement. To open that up to younger residents so they can network with nonprofits, city government, and to learn how powerful a neighborhood group can be, is a really valuable attraction to our volunteers. It’s a great opportunity for younger residents to experience the world of civic engagement and how diverse it can be. However, I tried to make sure active residents of Knoxville were involved in leading the volunteers to help ensure people would feel like they were coming to a gathering of neighbors. Active residents know best what it means to walk through the door and feel like they are coming into a gathering of community members.”

Hannah told me that planning the conference was a lot of work, and that she learned a lot from the experience. One thing that surprised her was how meticulous you had to be when working with so many moving parts. For example,

“When we do name tags, we have to make sure everyone gets three door prize tickets, and that they get the right meal ticket, and everything is spelled correctly, and that their workshop is listed on their name tag. It takes forever.”

Despite the challenges, Hannah says that the greatest satisfaction was when the volunteers told her that they enjoyed the conference and want to come back next year.

Volunteering, civic engagement, meeting new people, and making new friends is what the Office of Neighborhoods is all about. Having them here in Knoxville to help lift people up to make lasting change in their communities is no doubt a blessing; we are lucky to have such dedicated city staff and AmeriCorps members supporting their efforts!