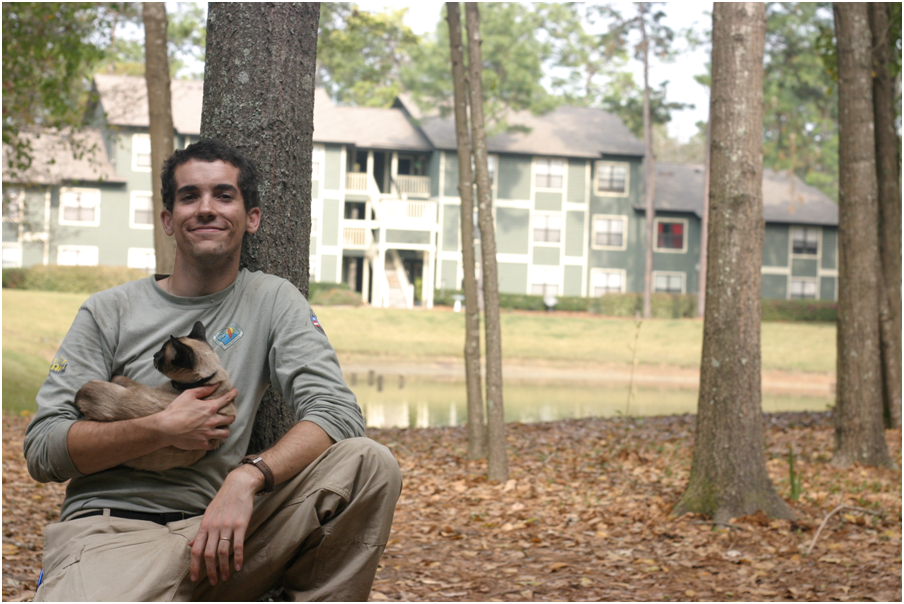 For National Pet Day (April 11th) I wanted to reflect on the role that cats played in my second year of AmeriCorps service back in 2007.  It was the winter and I had relocated to Jacksonville, Florida in January for my second term of service with Florida State Parks.

I was living in a house on Big Talbot Island that had previously been owned by an area doctor, but was now held by the State Parks.  I had relocated to Florida for a second term of service, in part, to continue my national service developing targeted experience in the environmental sector, but also to propose to my wife.  Sara had recently said yes and had moved up to Jacksonville.  It was a cool Florida evening and Sara was still at work when I heard a noise outside. That is the first time I met Sandals, a beautiful cream-colored Siamese cat who was malnourished and in distress.  I remember the way he followed my legs with his head as if pleading with me to not leave him.  At this point in my life I had little to no experience with cats and my general opinion of them was that they were aloof and finicky critters.  Nonetheless, Sandals seemed to have genuine need so I gave him some strawberry milk.  I’m not sure why strawberry, but at the time it seemed like he would appreciate it.  Sara came home soon after and advocated to keep him.  I had already largely accepted this scenario and was relatively easy to convince.

Several months later we had moved into an apartment and I came home after a long day of chainsaw work, digging post-holes, or something along those lines.  I heard a muffled mewing that I followed to the trash compactor of my apartment complex.  It was coming from the shopping cart parked next to it.  In the cart was a plastic bag.  I opened the bag and inside was a shoe box taped shut.  I opened it.  Inside was a frightened kitten that I brought inside and gave a bath.  My intent with him was to wait until Sara came home to see him and then take him to an animal shelter.  I learned then that if Sara sees an animal in distress, we keep that animal, so we added Little Bear to our family, the second cat in several months. Sandals and Little Bear accompanied me through one of the most important periods of my life.  During that year I completed my second year of AmeriCorps service, started grad school, and got married.

While Sandals passed away several years ago, Little Bear continues as a part of our family and has seen the adoption of two dogs, a jelly fish, a hedgehog, another cat, and the birth of my first and second child.

Cats are like silent watchmen, observing everything, moving softly, and giving comfort through their soft, purring warmth.  I am hands-down team AmeriCat.